WOW, over $6 million dollars raised on Sunday for the Becel Ride for Heart in Toronto. THIS IS WHY I AM RIDING 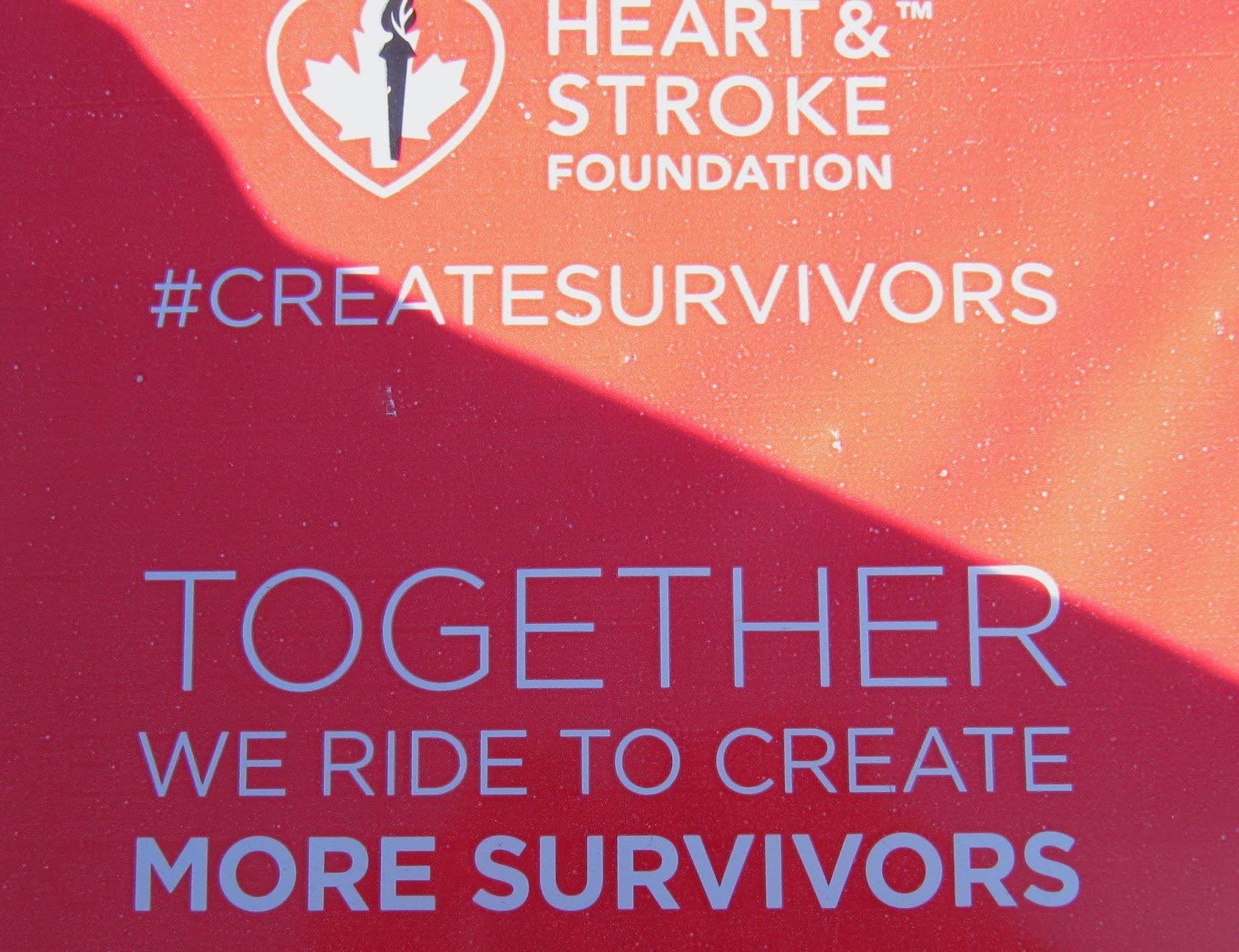 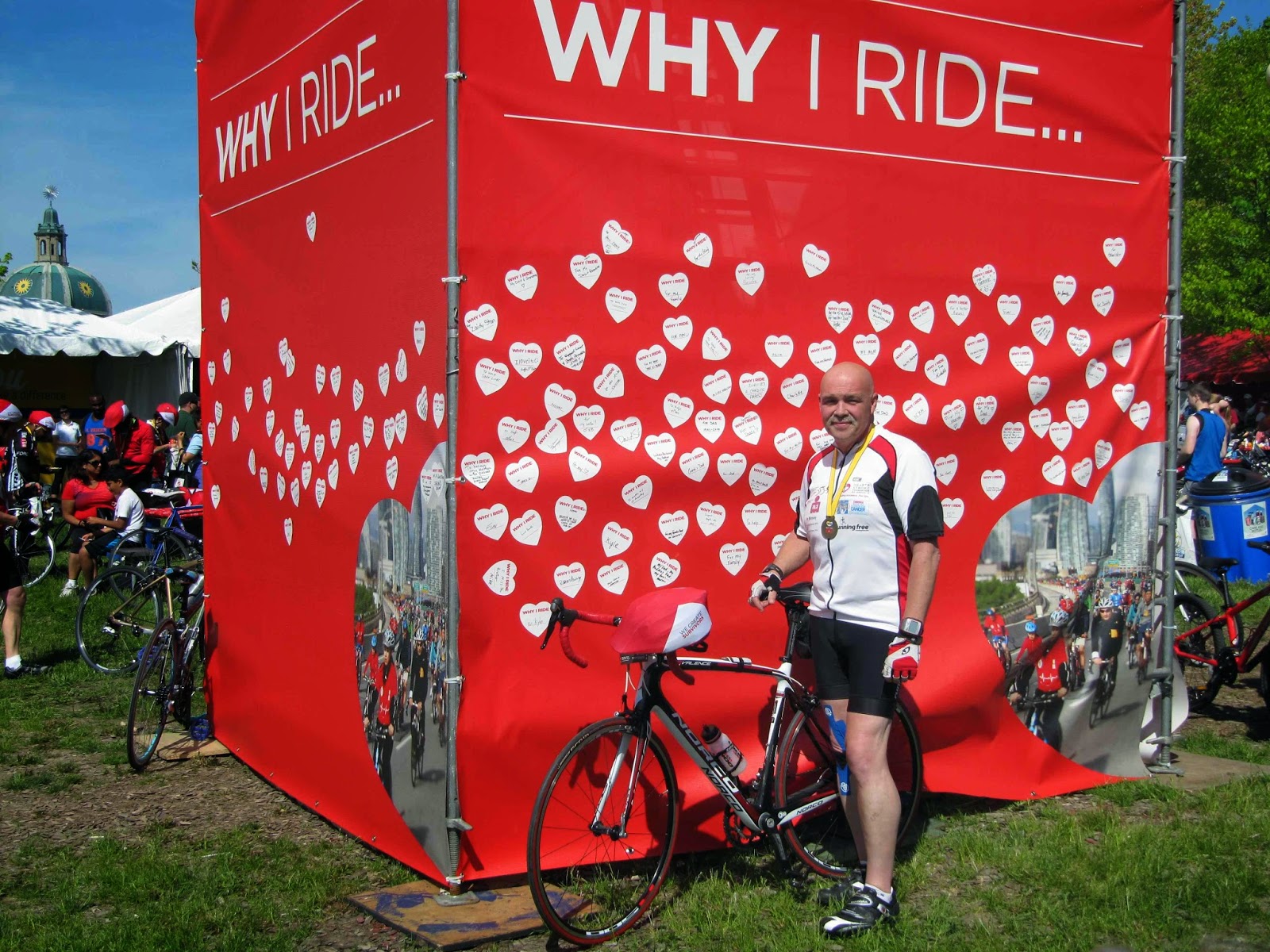 Sunday morning was the Ride for Heart, for the Heart & Stroke Foundation of Canada, which is a part of my Goal to Race 500 Miles in 2014 to raise funds for. Part of the Gardner Expressway and the DVP were closed down for half of the day so that 14,000 riders could get a chance to cycle the roads without any vehicles in the way. Most of the time on the DVP it is a parking lot, I was travelling faster on my bike than if I were in my car.

The morning started early at 4 am getting ready, load the bike on the rack and drive downtown to the Exhibition Grounds for the 6 am start. This was my first time riding in this event and it was a must with many thanks to Dan Penfold at Ride for Heart for getting me all set up this year.

There were riders of all ages, abilities and families getting out for some exercise and raising money for research and equipment for a disease that affects Canadians every single day. Riders had a choice of three routes, 25K, 50K or 75K everyone starting at the same place and ending at the same place. I was on the 75K route which started between 6-6:30am with the other routes staggering later. 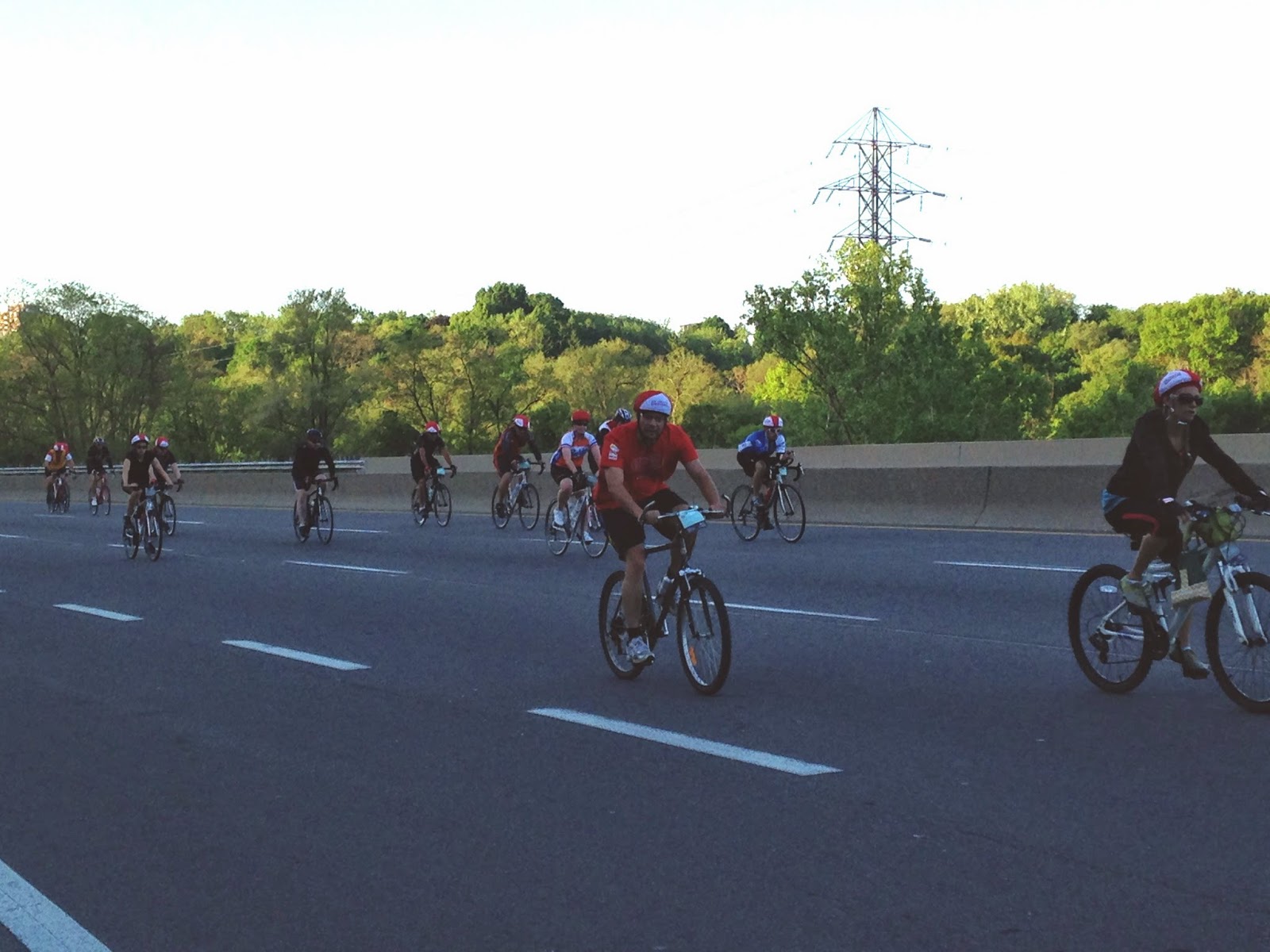 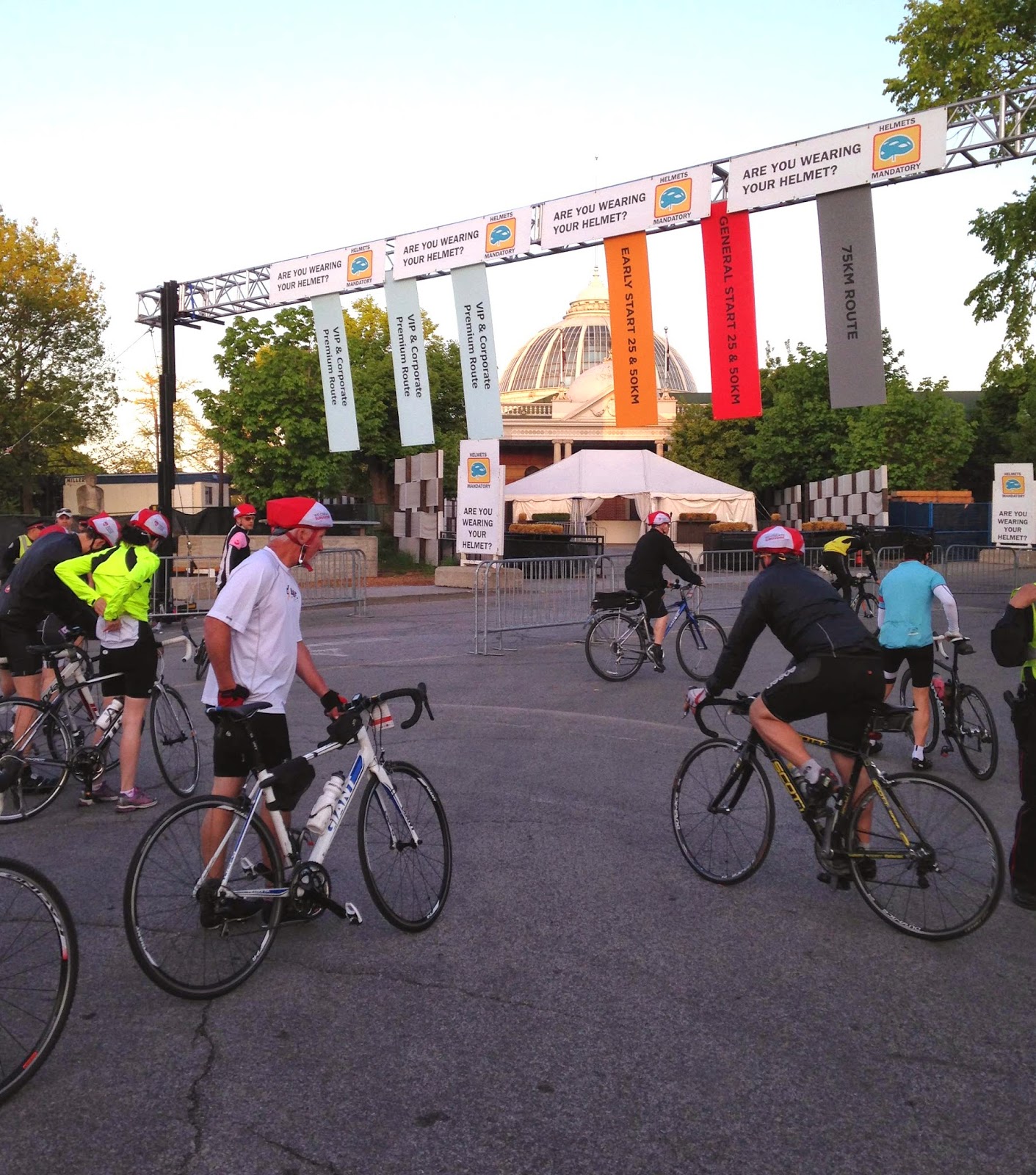 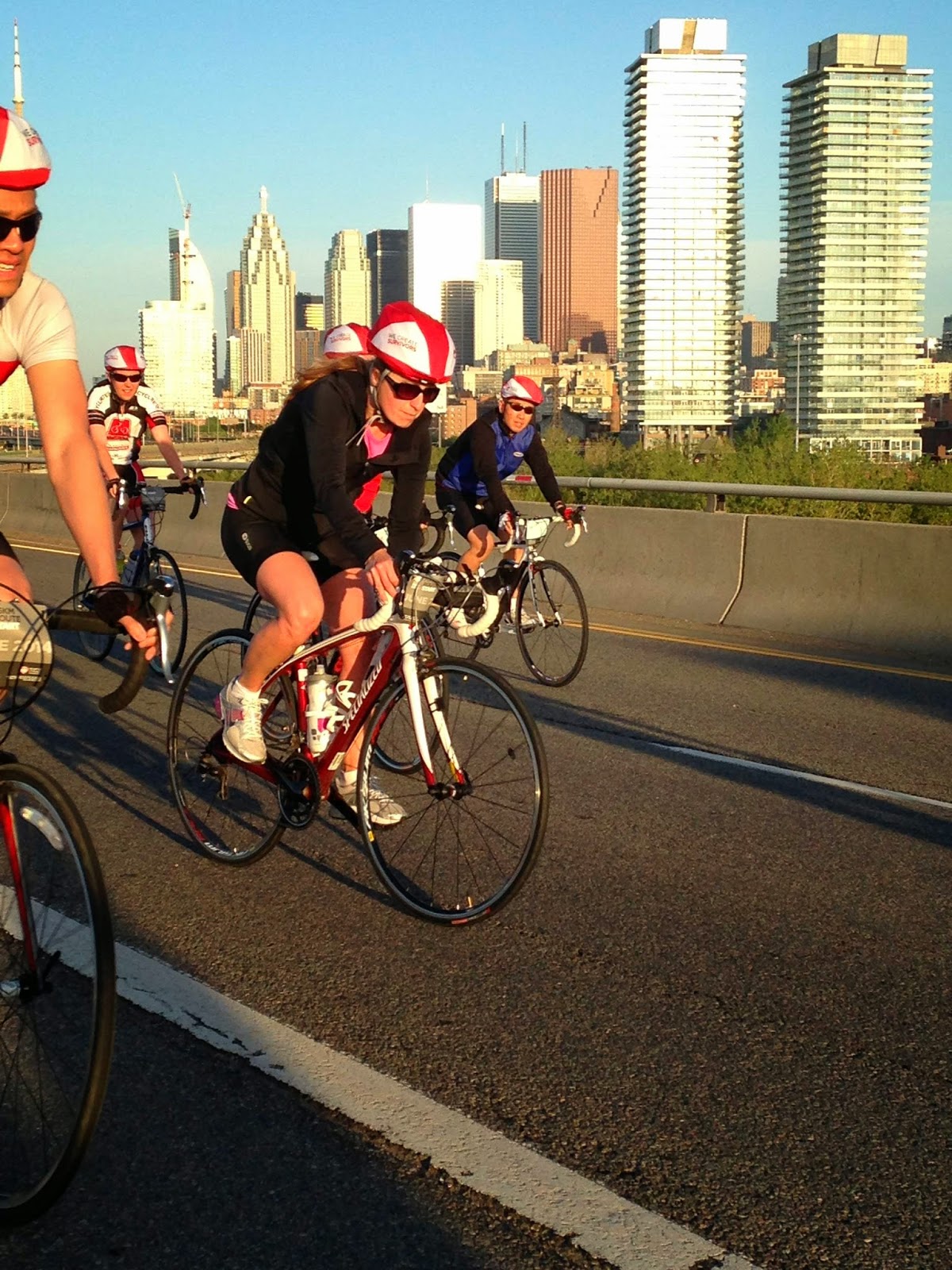 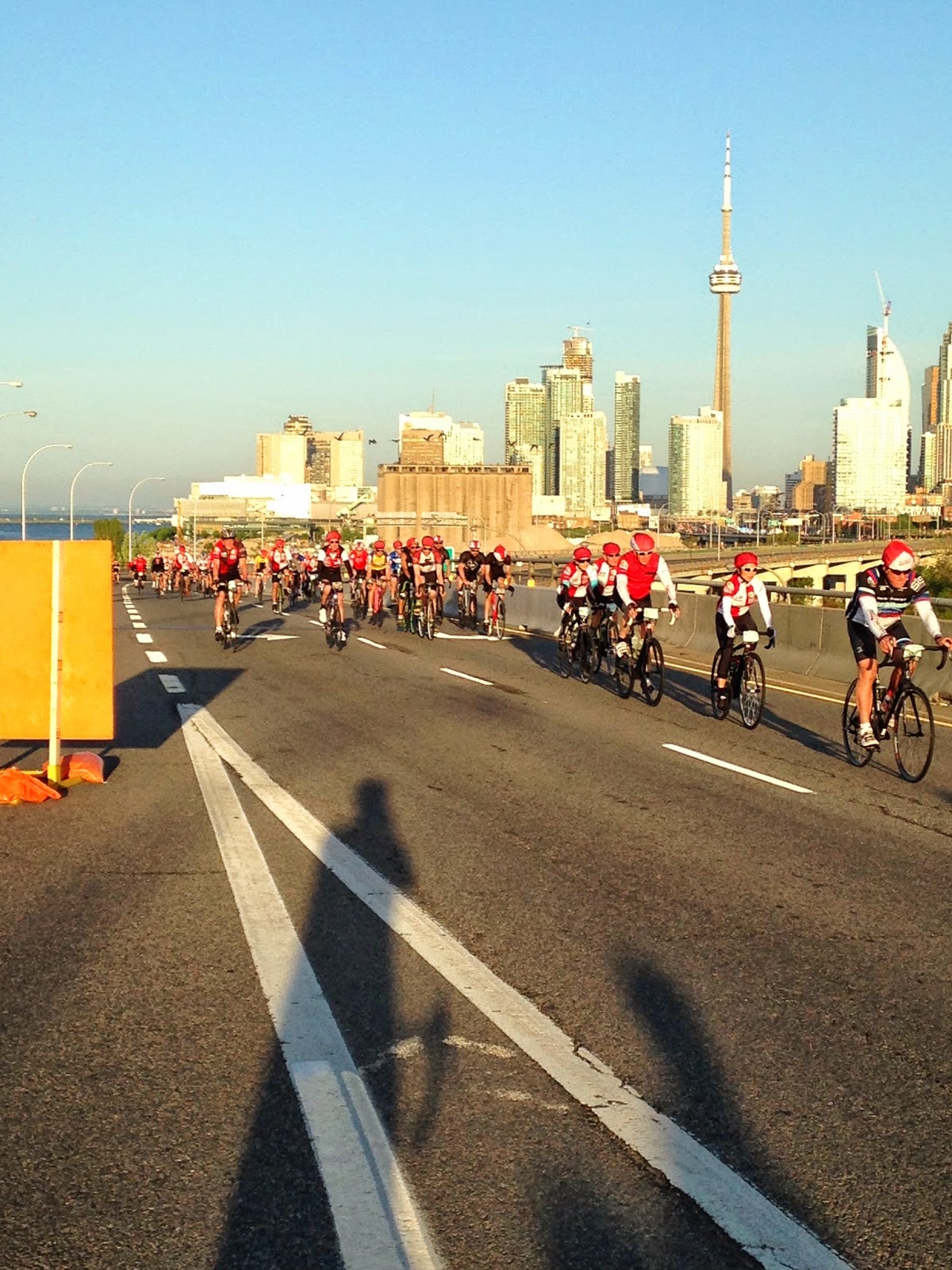 We headed from Jameson entrance onto the Gardner heading eastbound to the DVP, up the DVP all the way to York Mills which was the turn around point.  Had a nice break at York Mills, a little drink and snack, then on my way down hill for some nice breeze and speed. Turned around at the Bayview Extension and back up again to York Mills for the second turnaround. I know that it is a climb all the way to York Mills from about the Bayview Extension, but having to go a second time at it, I really wasn't looking forward to it again. Along the way, I stopped to see the amount of riders all coming up the DVP, there were tandem bikes, old style bikes, a (i don't know what you call it) car bike, it is in one of the pics and of course envy bikes, the thousands and thousands of dollar bikes, yes TT and Tri Bikes. I took a lot of photos and some videos along the way. 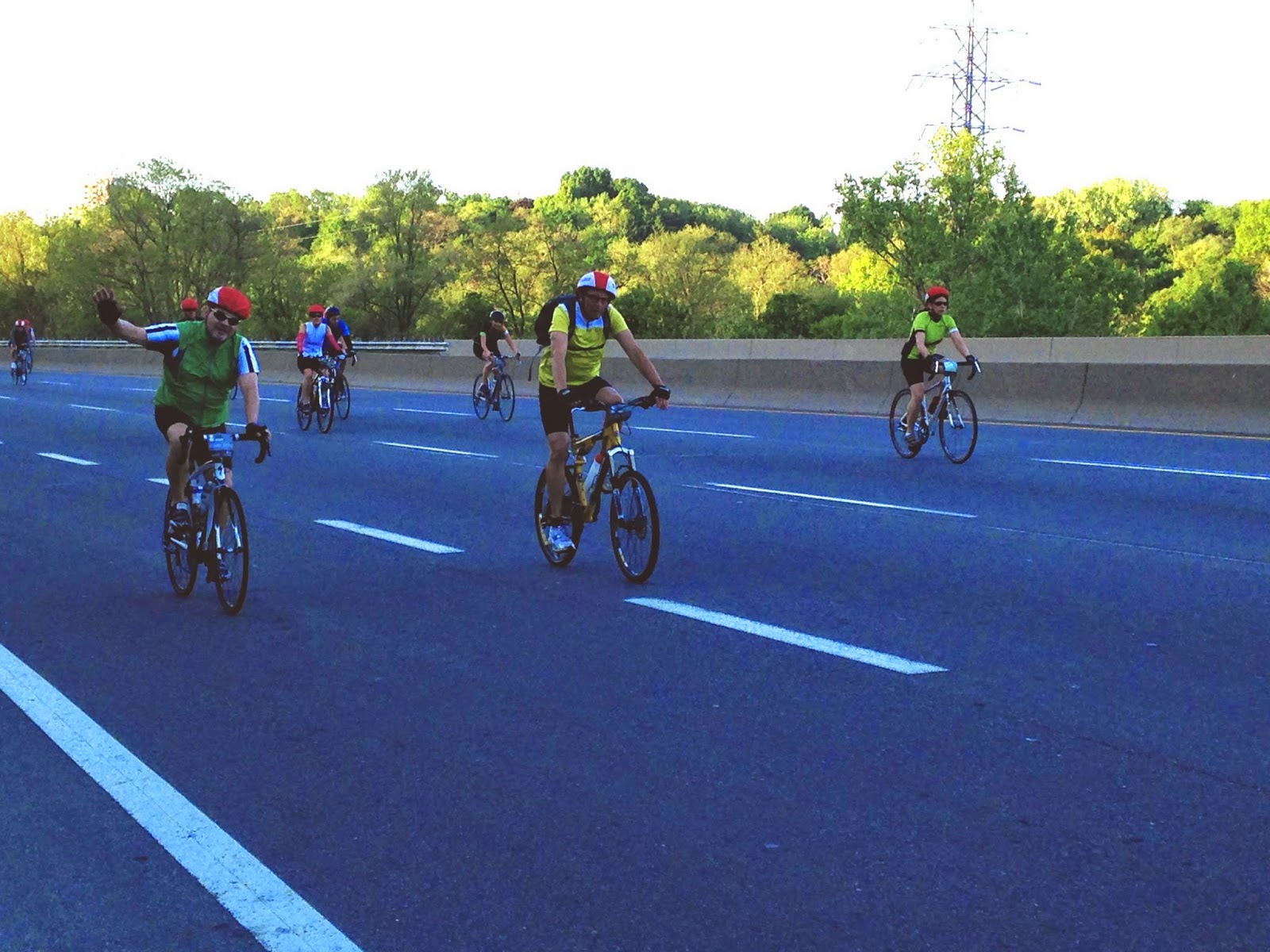 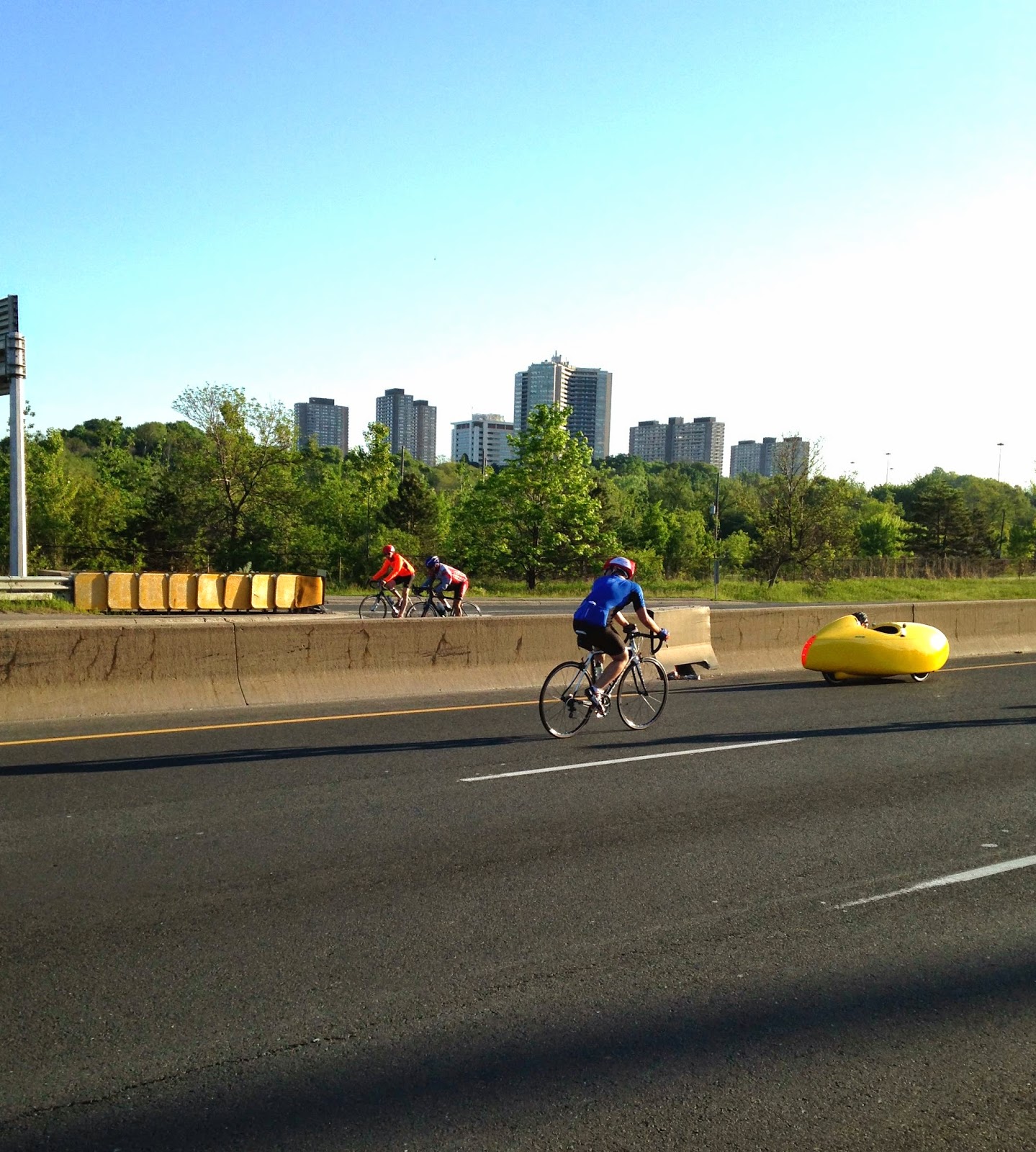 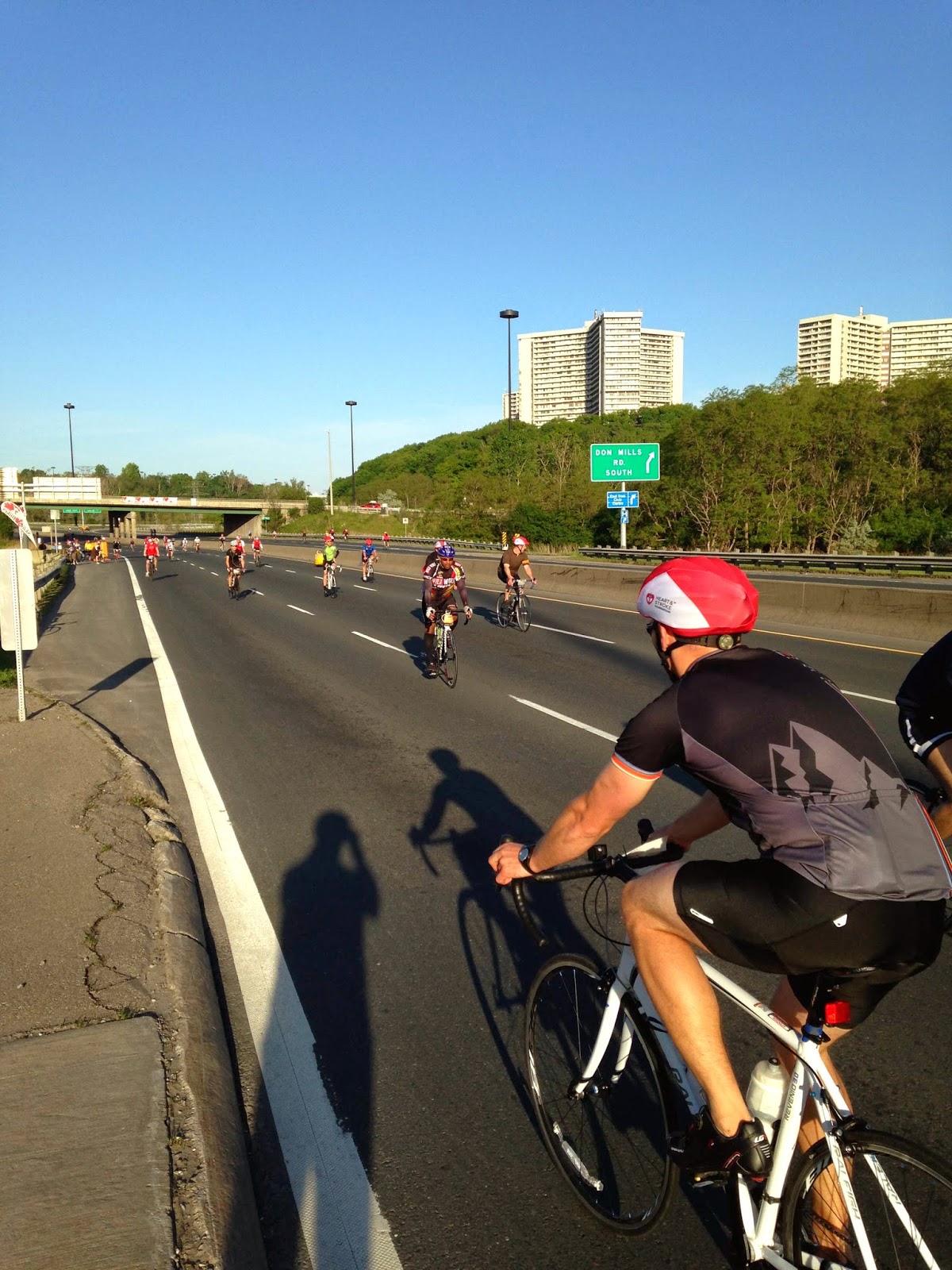 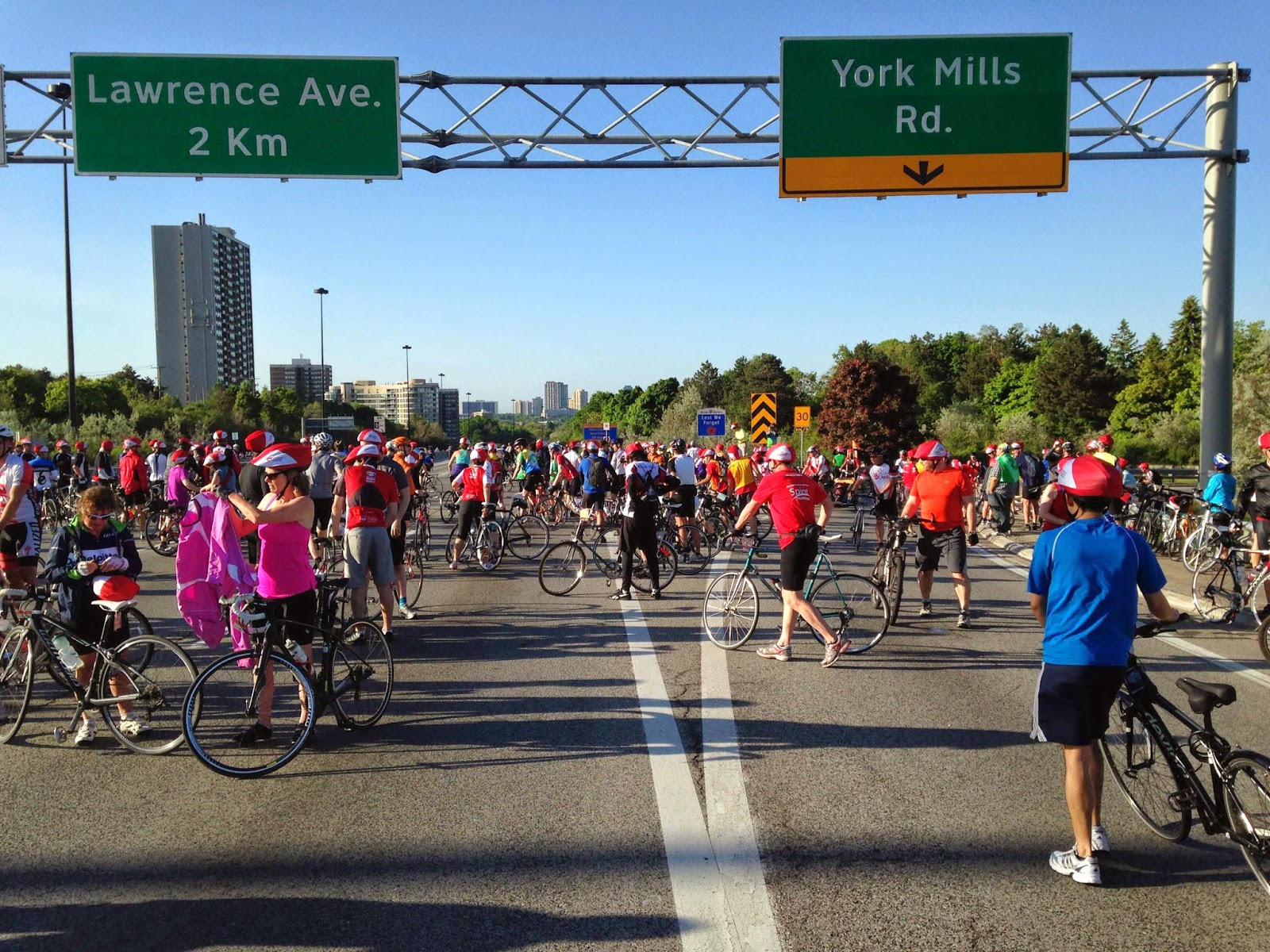 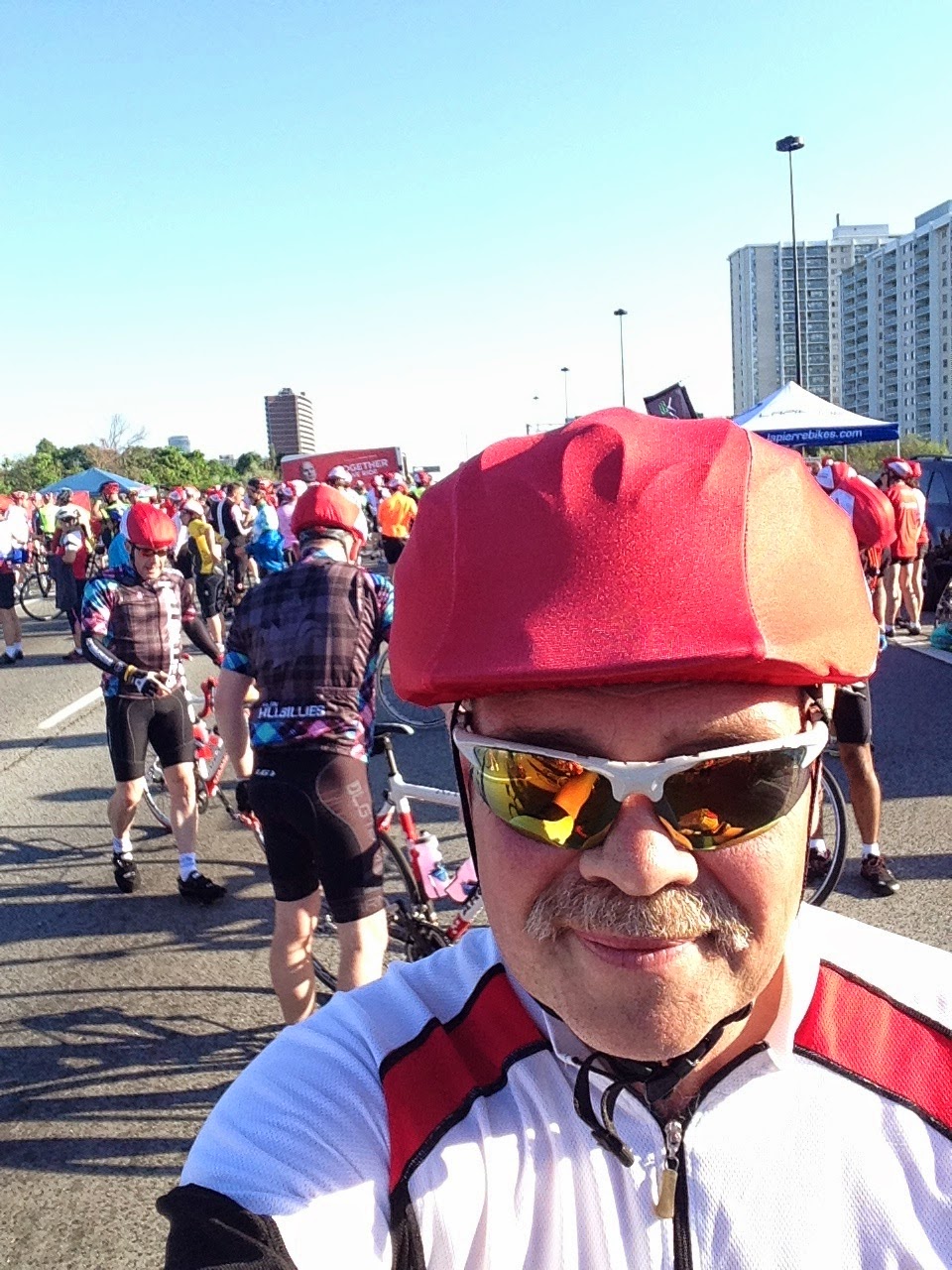 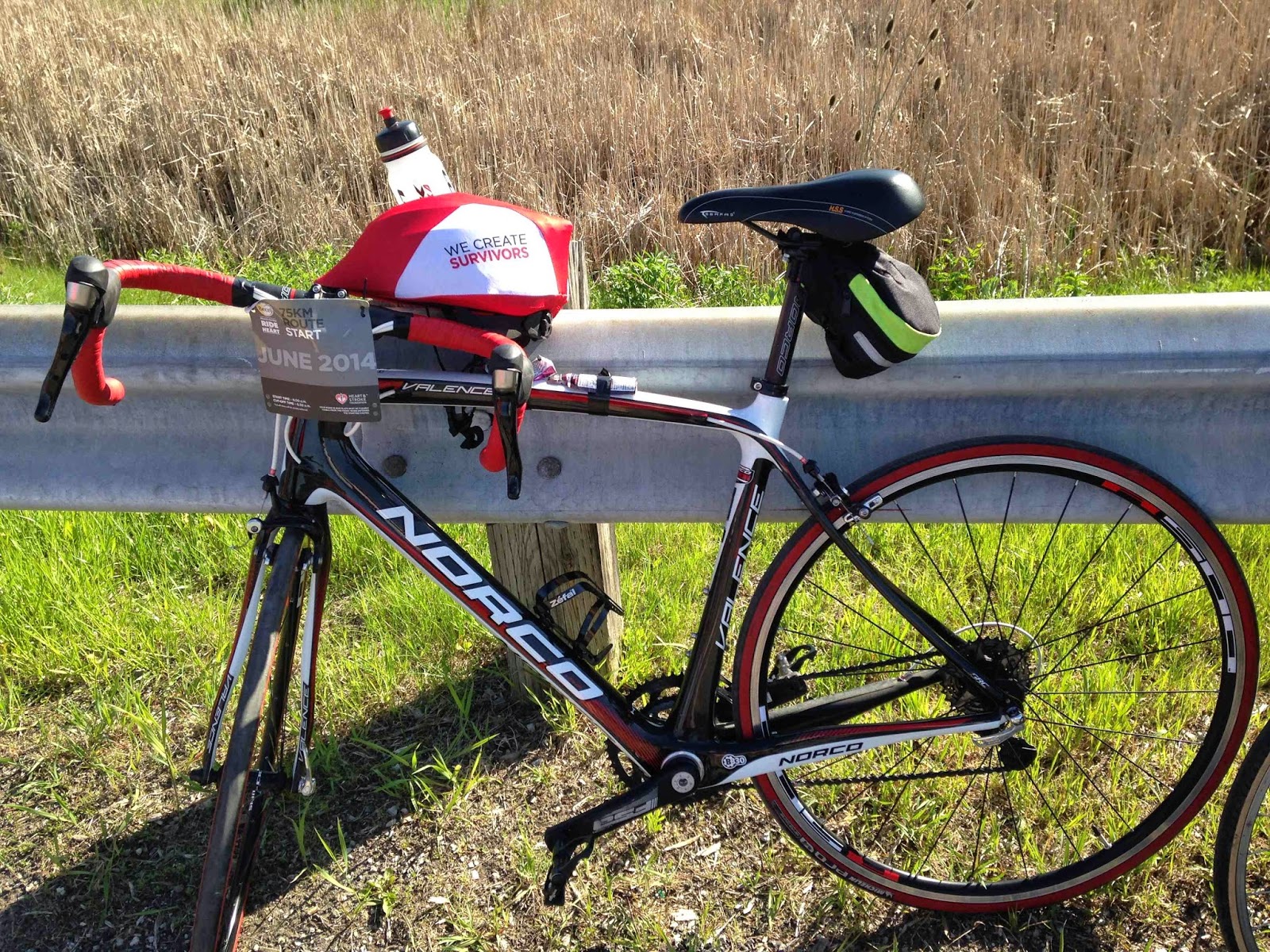 I know that it says that there was not suppose to be ANY Peloton riding or they would pull you off the course, but as I am riding along in the centre lane, I can hear this roar, almost like a low engine, getting closer and closer. I turned my head to see about 20 bikes gaining ground really really fast and the sound that it makes as they all go past you is a rush feeling.

Coming back into the downtown core, you really were starting to see the bigger crowds as most of the riders were leaving from 8:30 to 9:00. It was a see of red helmet covers and the background of the downtown core. 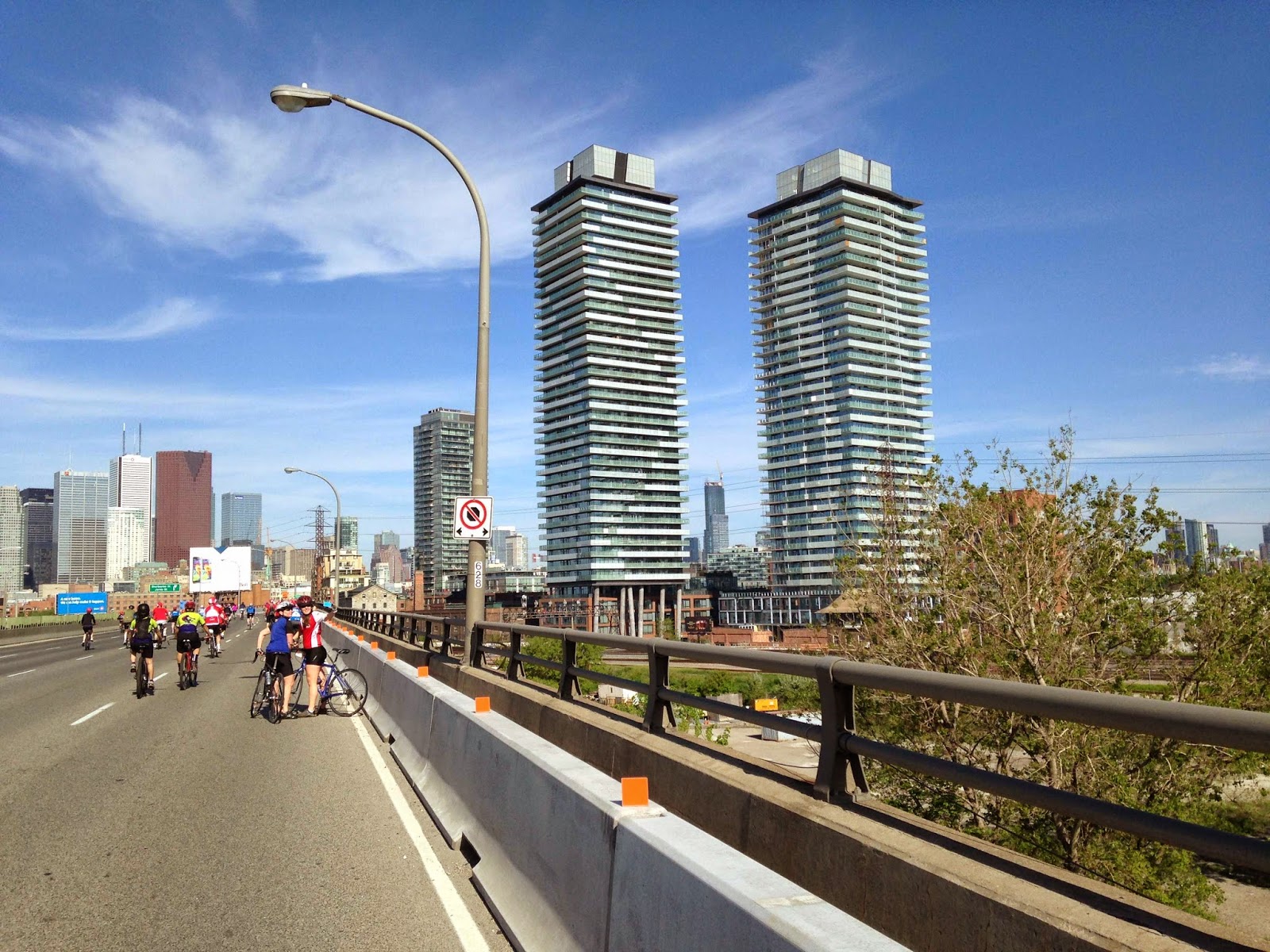 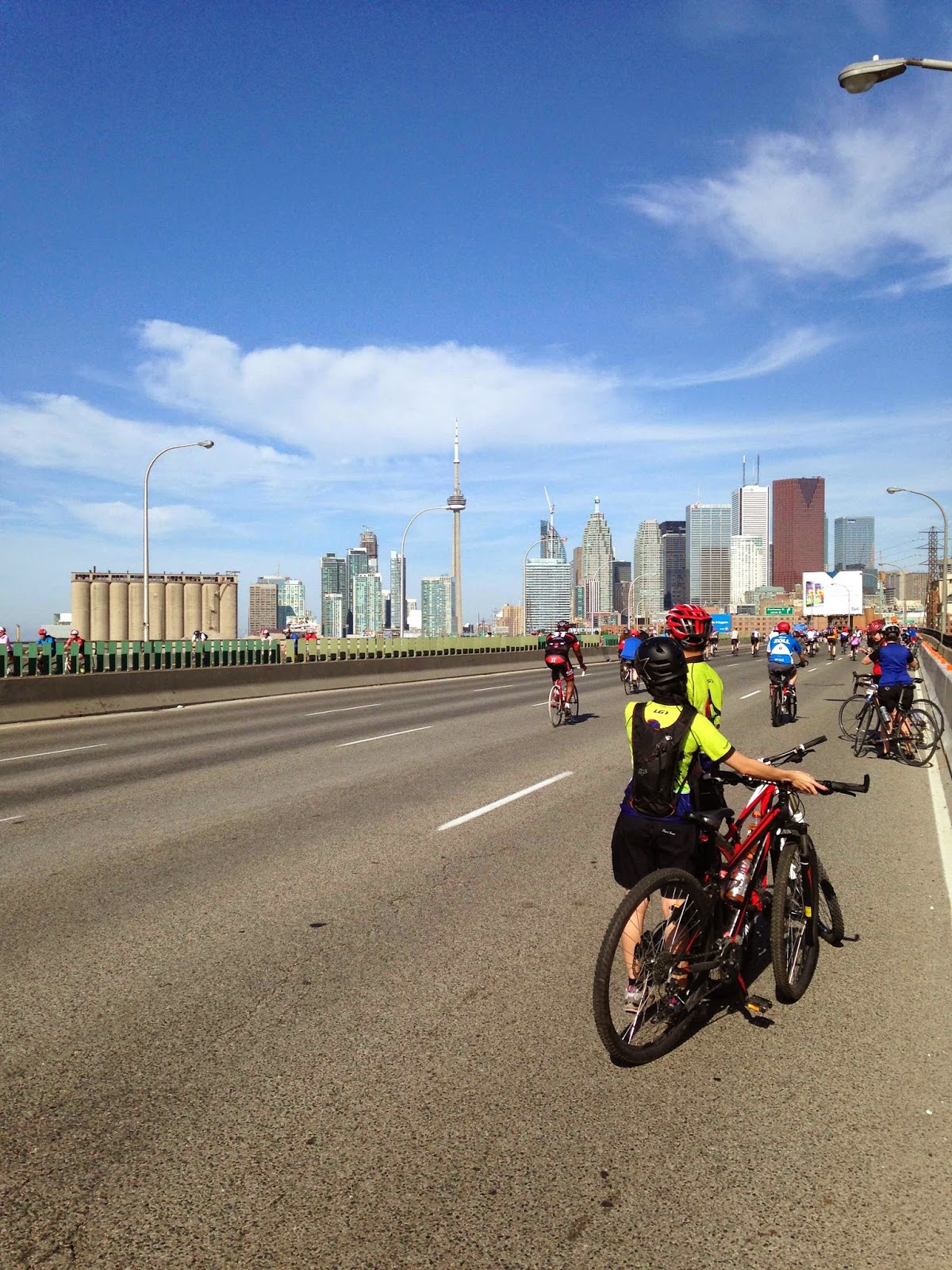 After coming back from the South Kingsway loop for the 75k'ers we came up the Jameson exit to a crawl as we had to get off our bikes and walk the rest of the way to the finish area, as all of the 25, 50 and 75K riders converged into one lane area leading up to the finish and park area. 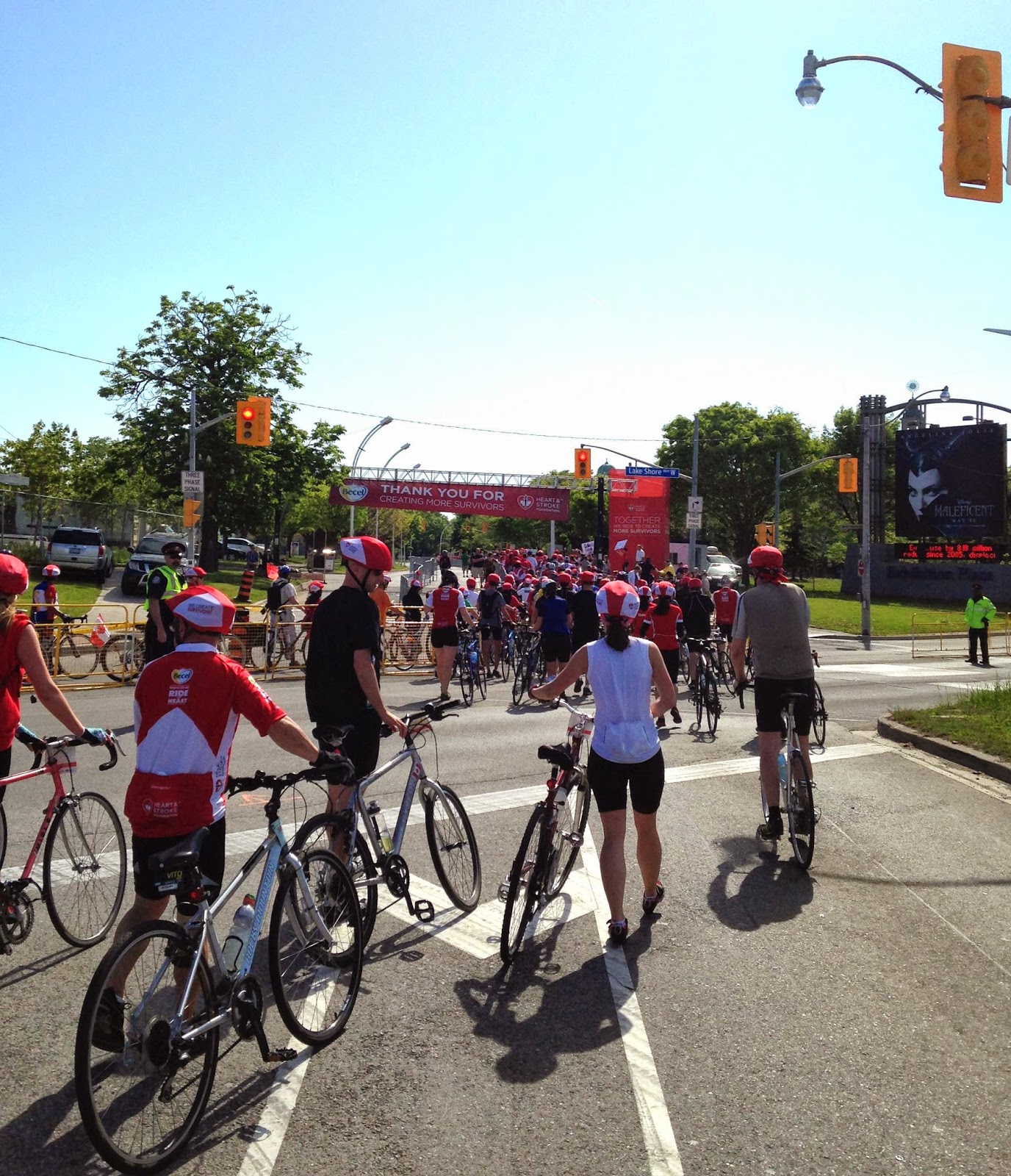 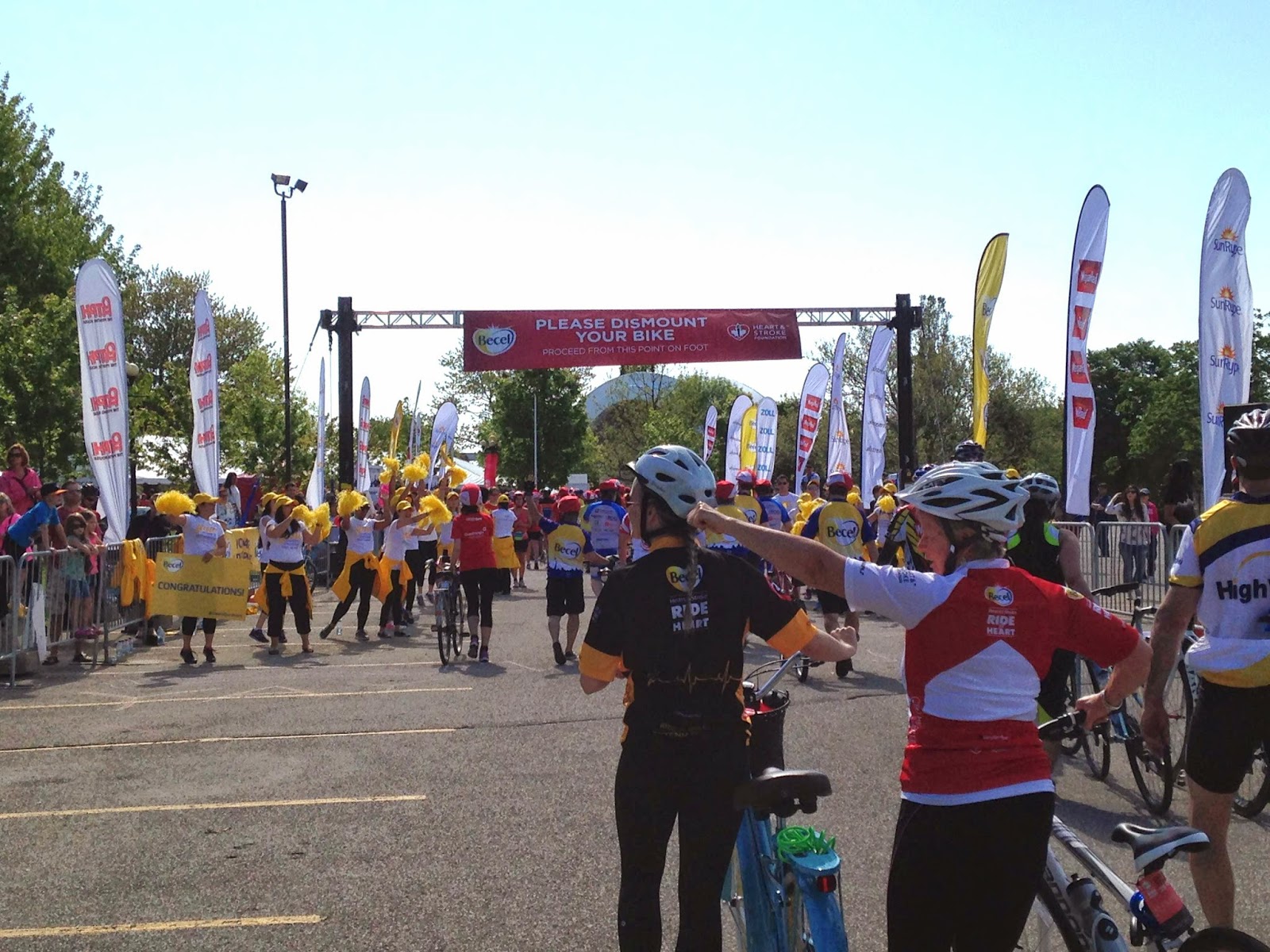 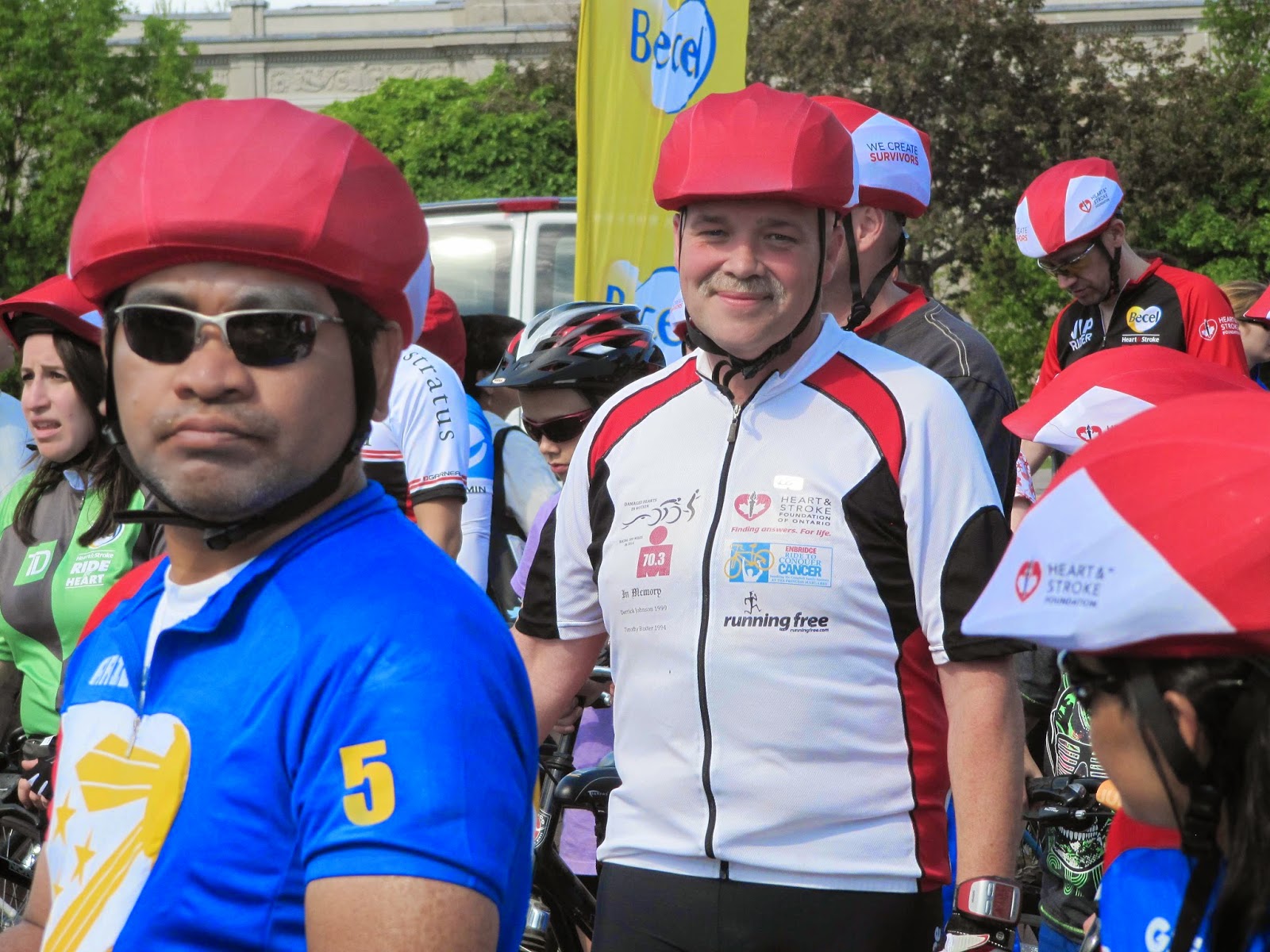 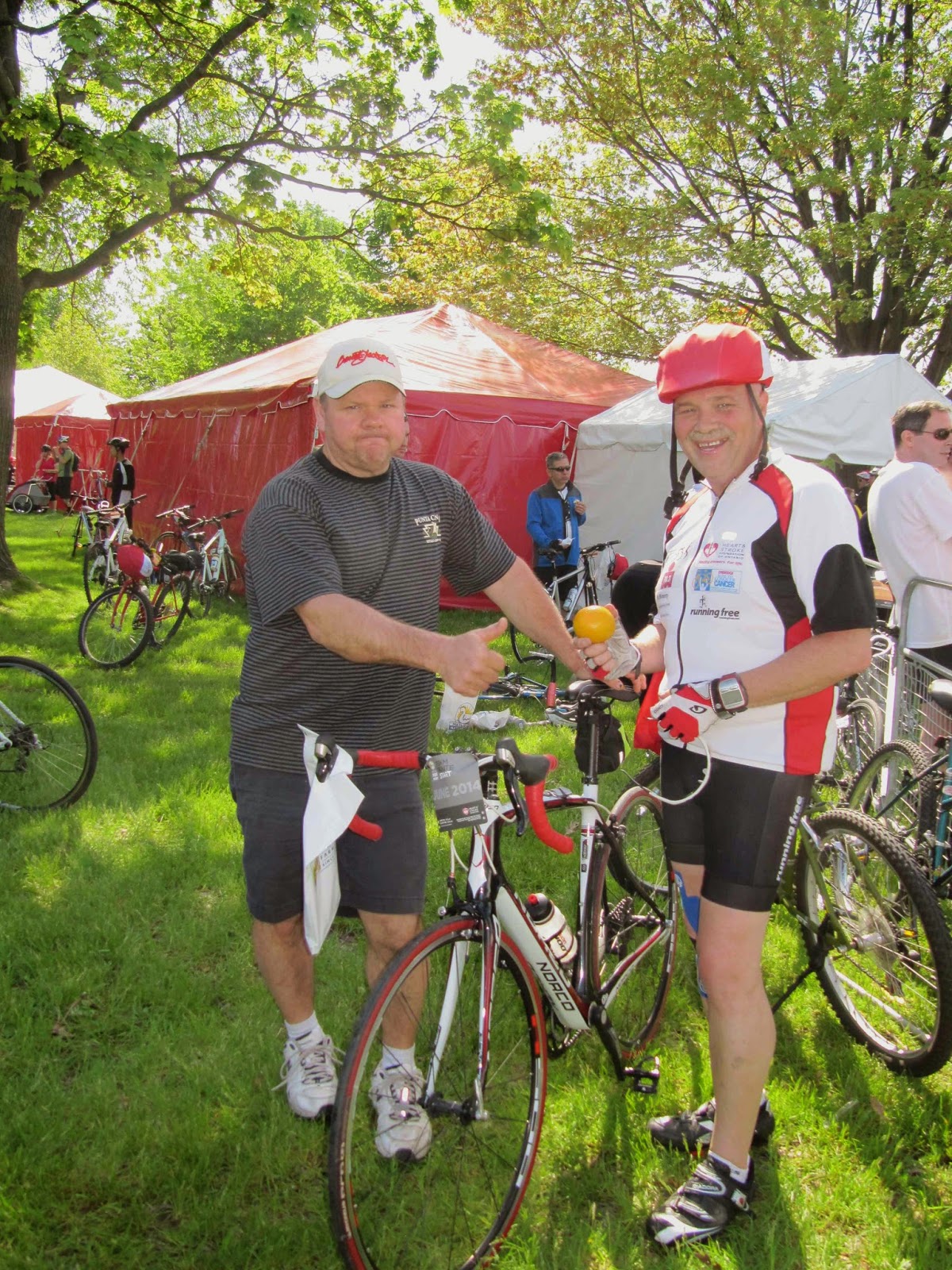 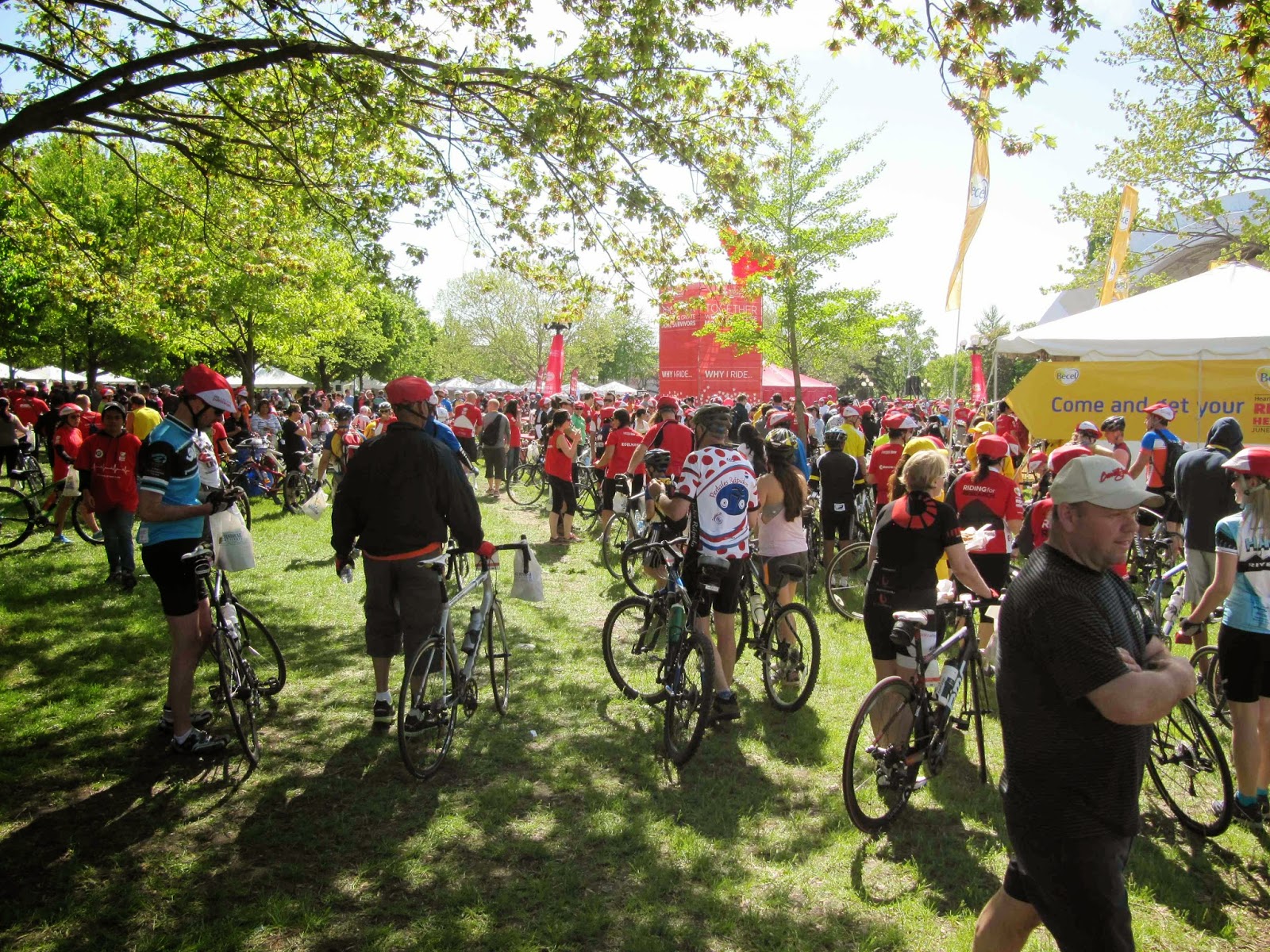 As I am walking in, I see my wife (which was a surprise as she was at home this morning) along with my friends Dino and Kelly at the finish line.  So at the finish line, I am and the 110.1 mile mark of the 500 miles for the year, or in Metric 178.3km. On the 14th, I will be running from Niagara on the lake to Niagara Falls and back again for the Ultra 50Km race. So when I get to Niagara Falls, I will be over the 200k mark and for those who have pledged so much per 100km, get ready for another payment to the Heart & Stroke and I thank you so much for pledging this way as well as it makes me drive harder to get to the final goal of the year.

Dino and Kelly will be riding from Niagara to Toronto this weekend for the Enbridge Ride to Conquer Cancer. As I had said in a previous blog, Dino is a Cancer Survivor and will be riding again and this year his wife will be making her first ride on a brand spankin' new bike, hopefully she has a nice soft saddle. Good luck with the ride and have fun out there the most Dino and Kelly. We will see you at the finish line, Ivana, me, Maya and Holly. 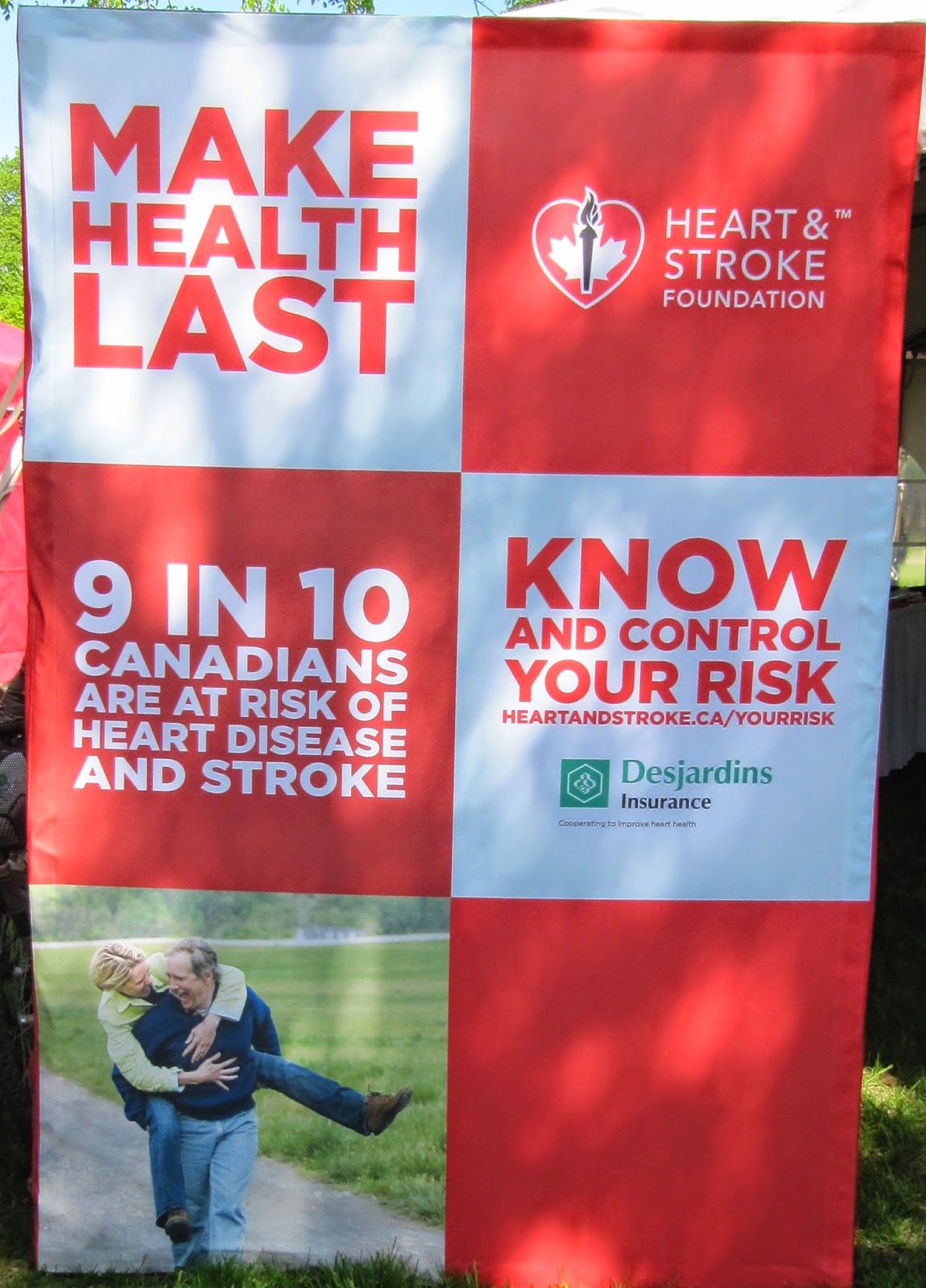 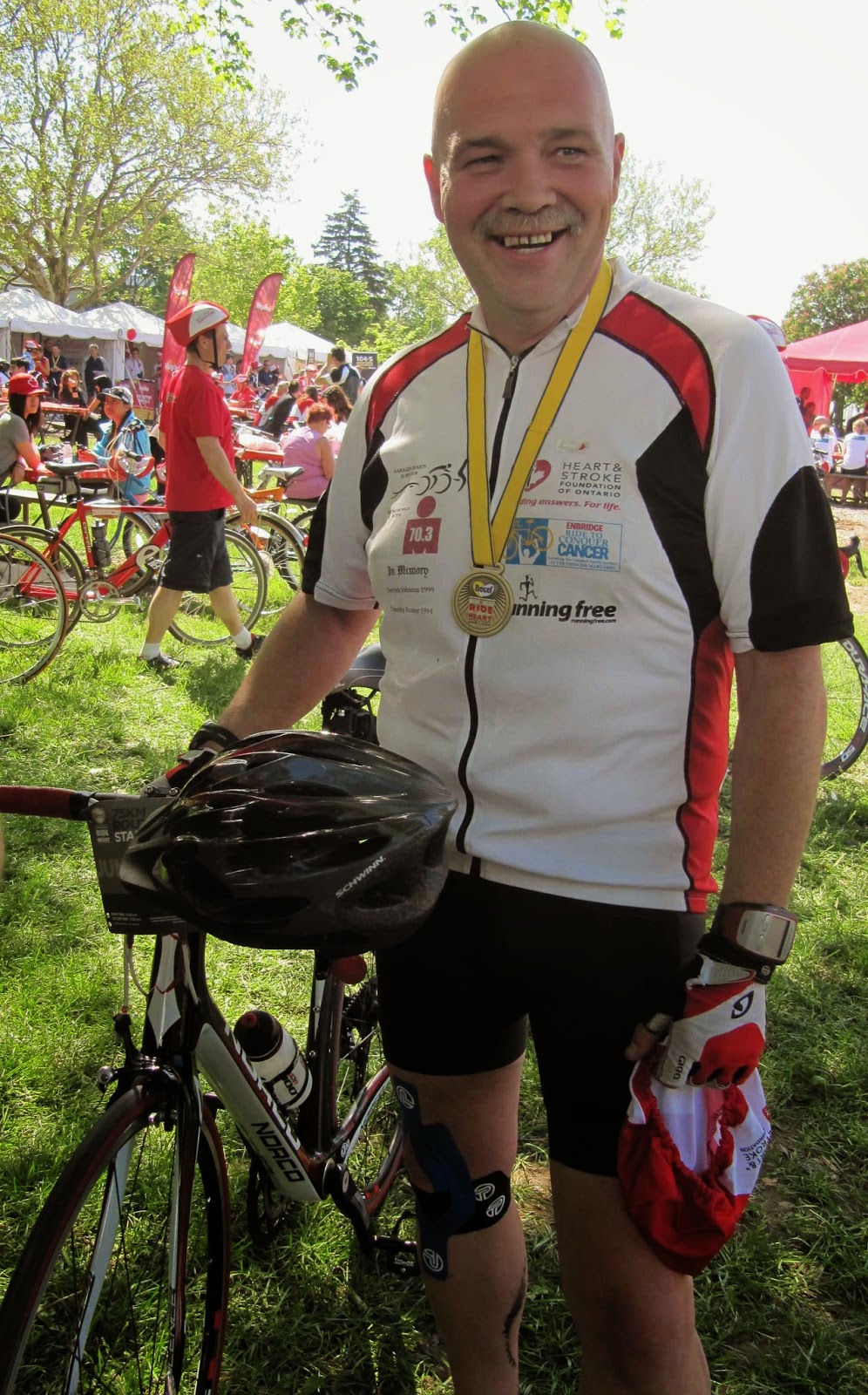 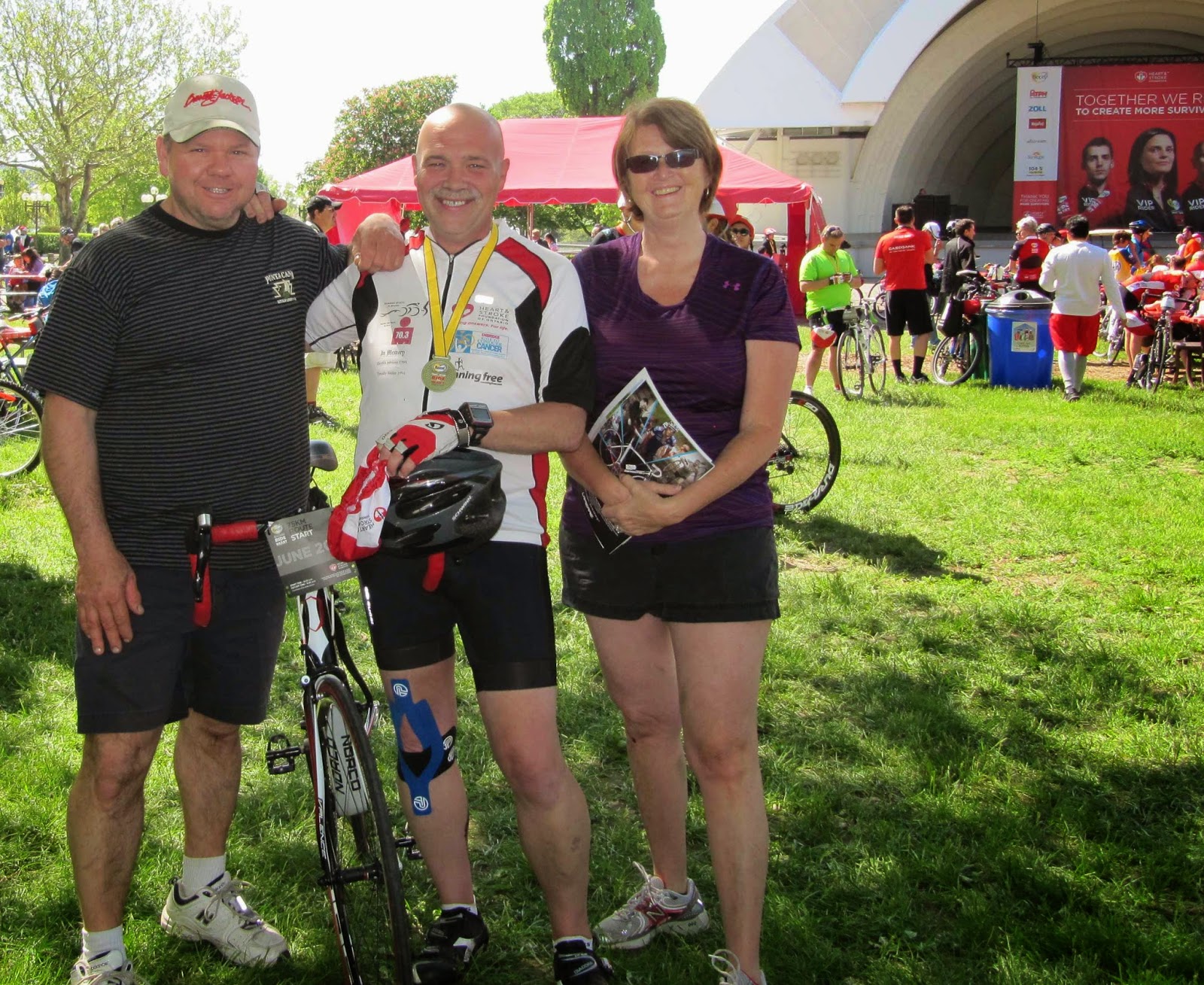 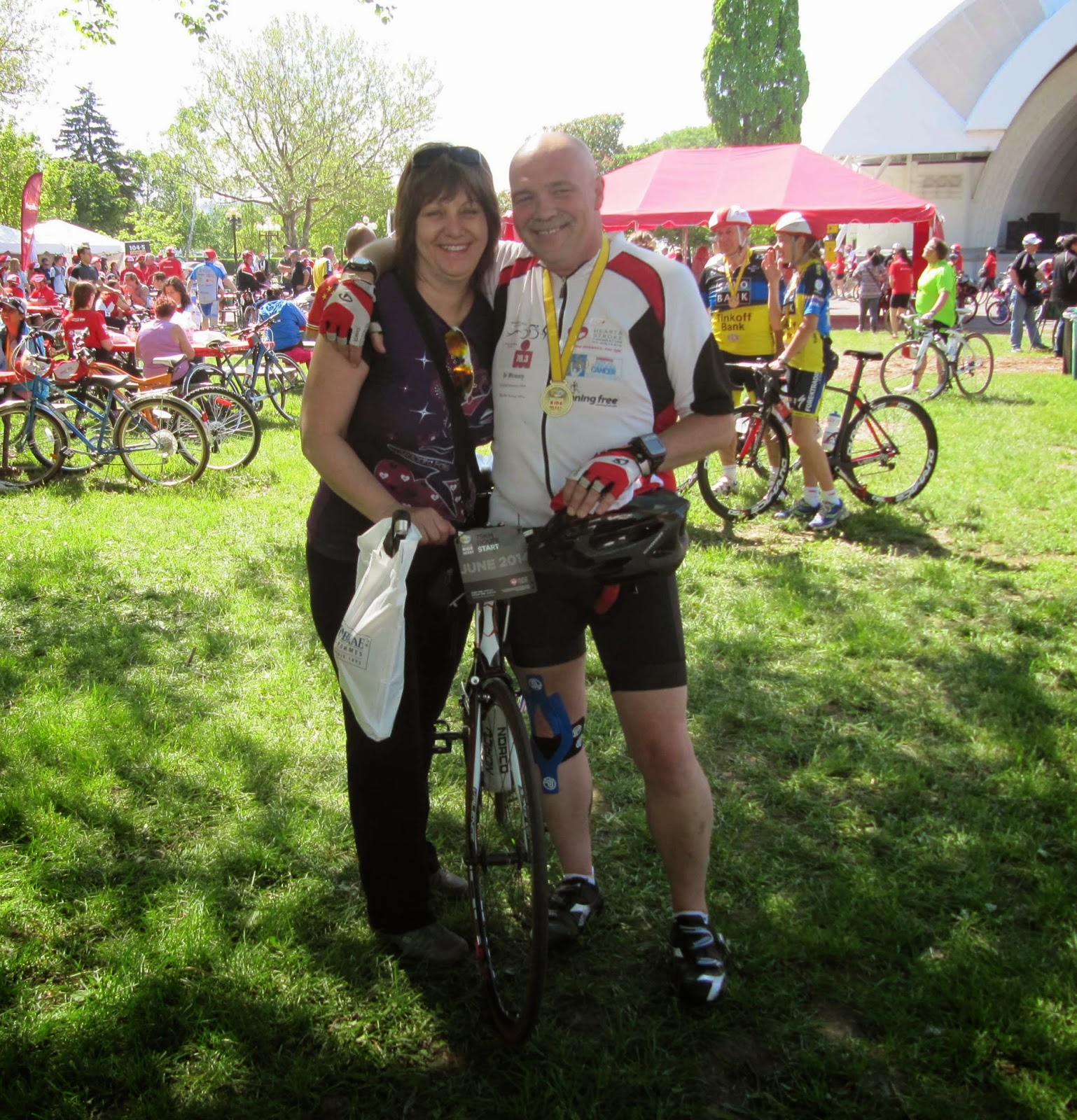 Posted by Damaged Hearts In Motion at 13:06

Damaged Hearts In Motion
Hi There, I my name is Rick (Damaged Heart) and I have decided to Race 500 Miles in this year of 2014 with a goal to raise $7,500.00 for the Heart & Stroke Foundation. In 2008, the day after Father's Day, I had a Widow Maker Heart Attack. I was 42, 289lbs couldn't walk that far and was walking with a right dropped foot and a cane. After Rehab at Toronto Rehab Cardiac, they taught me to walk loose the weight and set goals. Early in 2009, I set a goal in rehab to just Finish a half marathon walking. Since then I have been doing 5k, 10k, ½'s and full marathons. This is the year that my goal is going to be a HUGH ONE. Race 500 Miles in the year of 2014. I have been training for this feat and it will all start on February 9th with a Valentine's 5K in Burlington. This will all be to raise $7,500.00 at least, for the Heart & Stroke Foundation. There are many things I willl be doing through out the year and I will keep you posted as I go.